It is not new that there is a need in Brazil for mid and long-term mass investment in infrastructure and public policies. However, upon the spread of Coronavirus starting around March 2020, some recurring issues in the Brazilian citizen’s life were enhanced and the need for discussion on solutions knocked at the door of the national policy.

Regarding some areas, from now on, not only political ability, but also technical knowledge, proceedings celerity and inclusion of new technologies, and new forms of thinking on the territory will be required. Policy, mainly on large and medium urban centers, should be ruled by some issues which are part of the daily routine. At this point, we shall discuss five of them: Housing, Sanitation, Income and credit to the PME (Small and Medium-Sized Companies), and Public Transport.

The first and most important measure to be taken during the pandemic is social distancing. How many of us did not hear from communication vehicles: “Stay at Home!”? However, according to João Pinheiro Foundation[1], when we look at Brazilian data, there is a deficit of 6 million houses, in other words, over 10% of the Brazilian population do not have a place to live on or live on inappropriate conditions places. Southeast and Northeast regions are the ones which most represent such deficit and, coincidently, in the moment on which this matter is written, these are the regions which most present cases of Covid-19 in Brazil. 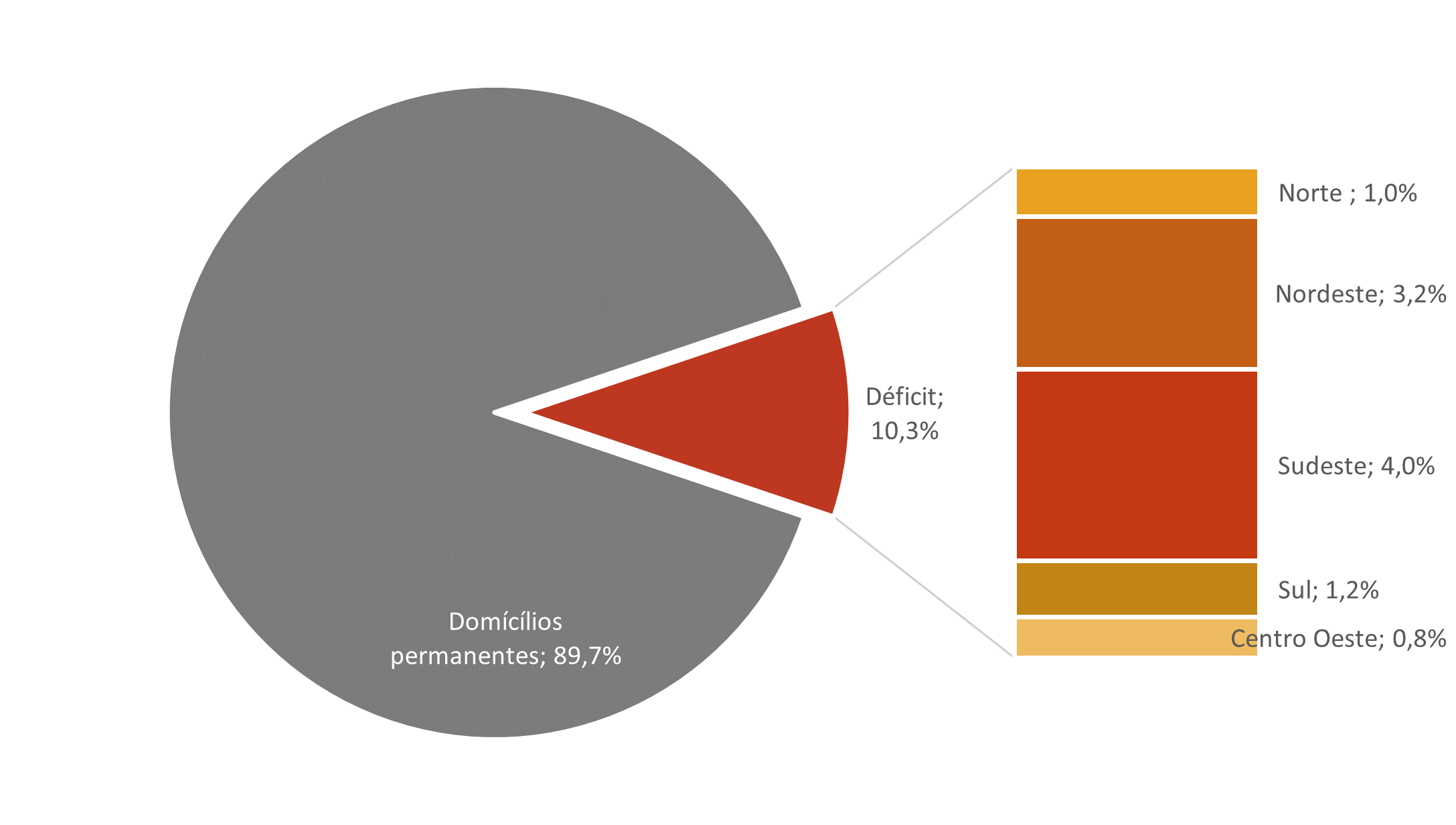 Hence, solving the housing deficit problem in the country is no longer a long-term policy as it has been addressed over the past years. The development of solutions which increase the offers of access to land and appropriate housing is urgent.

It is impossible to separate sanitation from housing. “Wash the hands” is the trademark of this pandemic besides “Stay at home”. But how can we talk about “washing hands” in a country where, according to the 2018 National Household Sample Survey (PNAD), 24 million of residences do not have piped water, 57 million do not have access to sewage system and 15 million are not eligible to waste collection?

Basic sanitation is an ensured right based on the 1988 Constitution! 32 years later we are still talking about the lack of implementation of basic issues as shown in the maps above. When we go deeper on issues regarding basic sanitation, such as sewage treatment, treated water continuous supply and solid residues selective collection, the issue is even more critical.

In the 2030 agenda for sustainable development2, the United Nations (UN) presents, out of seventeen purposes, at least eight which are intrinsically connected to the sanitation issue as a measure to fight against global warming and sustainable management of natural resources of the planet.

Regarding sanitation, the country presents some successful cases, almost always connected to the collegiate management, formation of intermunicipal consortiums, strong participation of the private initiative together with the public power and permanent education actions, but they are still occasional situations which should be reviewed, taking into account the specificity of the territory where they are located.

Income and Credit to the PME (Small and Medium-Sized Companies)

This is probably the third most addressed issue by the news in general. “How is the income of the worker who shall stop executing their daily duties?”. “Preventing small and medium-sized companies from working is the same as enacting their bankruptcy – how to earn a living?”

To address the complexity of such issues, first we should look at two concerning data in the country: unemployment and informality. Before the pandemic, according to IBGE3, Brazil had about 12 million unemployed people, which is a high rate. Regarding informality, the number more than triplicates – 38.4 million people. Therefore, over 50 million Brazilian people are helpless from any security brought by labor formalization.

Globally, as emergency solution, a minimum wage has been proposed. The United Nations (UM) recommended governments to take urgent measures. In Brazil, such assistance took long to be made available and has generated several access and agglomeration problems, which many times demotivate the search for the benefit and the citizen, who raises money today to eat tomorrow, is forced to go back to the informal labor.

Regarding small and medium-sized companies, the sector represents in Brazil, according to Sebrae4 (Brazilian Support Service to Micro and Small-Sized Companies), about 98% of the country establishments and generate approximately 50% of the positions which, for some time now, has struggled with loans high interests – this sector experienced a worsening in the situation after Covid-19 pandemic.

While in countries like Japan, Portugal, Australia, Italy, and New Zealand, borrowing money is easy and cheap, with interests around 0% per month, in Brazil it is a bureaucratic matter with high interest rates. There are several motives to explain such situation: high nominal interest, low concentration of banks, non-payment high costs, and others.

Therefore, here there is a complexity of action which needs to be extrapolated beyond personal or a small group interests which, apparently, is very difficult to occur naturally. There is no chance to regulate this market without the Government intense action as facilitating agent using its intelligence, informatization and credibility to take the lead over the financial market. (It is important to point out here that no nation in this planet improved without a strong and participative Government, a thriving and formalized market, and a healthy and qualified population).

Many metropolitan areas, at the beginning of the pandemic, restricted the public transport, cutting the offer. It was a shooting in the foot! What had no quality and frequency in many places, started to circulate with more restricted schedules and, therefore, full. In the National Association for Public Transport Urban Mobility General Report -Simob/ANTP5, it is possible to understand that about 50% out of the motorized trips in the major cities in the country are made through public transport.

But what takes the public power to make hasty decisions like this to the point of turning the public transport a potential propagator of Covid-19?

The answer seems to be simple, but it is not the case. The cities which were successful in the containment of Covid-19 up to this moment, went through strategies such as informatization of the public transport system, previous knowledge of the types of dislocations made within
their territories, very well grounded and highly disclosed decision taking and involvement of the population and companies in the mobility plans.

We could highlight here other issues which are as or more important than those four mentioned above – education, health, environment, public safety, and others – but at this point, we went no further than these, not forgetting that, as these are problems that are multidisciplinary, strategic and of intense use of intelligence, from now on, shall require public managers increasingly capable of leading and committed to the society model which should strengthen the equitable distribution of housing, labor and income as pillar to a strong fall of the social inequality.

There is no way to survive as nation without people and companies which are committed to the human cause, highly connected with the highest technology, globally, and with progressive attitude.

The coronavirus crisis in progress addressed the acceleration of the structural crisis which we have been experiencing in the country. We should urgently rethink the models of economic development aimed to social, environmental, and urban policies which facilitate the social inclusion and should no longer accept unprepared administrators or administrators with Sebastianism biases.